Hello everyone I hope this weeks blog post finds you well. So after 10 days in Winnipeg I finally moved on. Unfortunately because I keep connecting with so many great people in the array of amazing cities and towns of Canada I am running a little behind schedule and “winter is coming”. The next leg of the trip between Winnipeg and Thunder Bay is renownly hot, muggy and other than a few serene lakes, not much for scenery, oh what is a boy to do? Why not “warp whistle” past it? 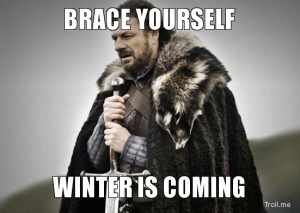 (This may be so, but new episodes of Game of Thrones are almost a year away 😦 )

And so I bypassed a 700km chunk of Canada for the small fee of 50$ (less than the cost of the 5-6 days of food I would have needed!) It was a last minute ride share I snagged Monday night and so the following Tuesday morning I crammed into a Volvo station wagon for 7 hours, that was holding 3 people, all their luggage and some asshole’s bike! 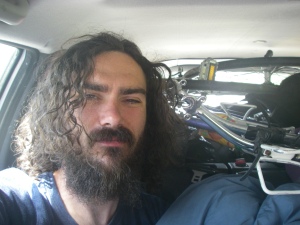 (A picture of said asshole looking like a zombie.)

For those who loved Mario World 3 I will admit I used whistles in that game to, so I had very little trepidation to do so in “real life”. Some people think this is in bad taste (Bryan!), but why suffer through water world when there are so many awesome other places? And so this is what it would look like if my bike trip was like Mario 3. 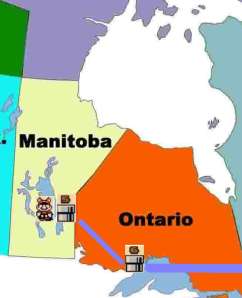 (For the Mario enthusiasts open this link in a new tab https://www.youtube.com/watch?v=EOg0GZZuCak and then click on the above picture.)

My time in Winnipeg was really rewarding I managed to catch 3 Fringe shows all of which were entertaining. I strongly advise trying to be in Winnipeg for it’s fringe festival it’s a cornucopia of arts and entertainment. Other highlights were volunteering at 3 different bike co-ops. 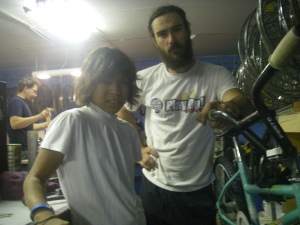 (Helping Angela fix her BMX at The Wrench) 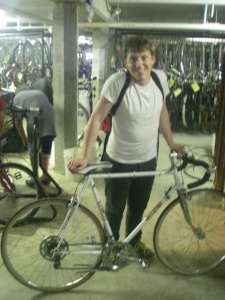 (Finishing my Magic Card buddy Matt’s cool Spanish road bike I found on Kijiji for him. The bike is aptly called The Matador) 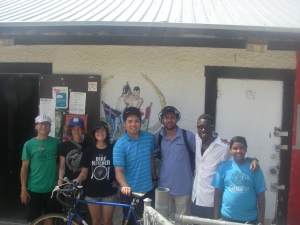 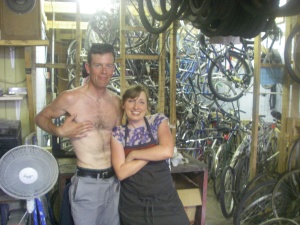 I was really happy I was able to volunteer at the co-ops in Winnipeg as many of the volunteers are a little overwhelmed and in turn a bit jaded from how many people need help and access to bikes. Its a big challenge as the goal of co-ops aren’t to simply fix and donate bikes, it’s to empower people to be able to do it themselves and in turn share those skills with their community, though I personally am happy to fix and donate bikes, many co-op mechanics are not.

However the large populations of street people whom have been marginalized and neglected can often be a challenge to work with as they have a wealth of frustrations and baggage that come with their life. For instance I worked with a very nice First Nations fellow named Fred. He wanted to be able to help me with his bike but because someone assaulted his hands with a hammer! He had severe arthritis and couldn’t. Also Fred had just recently been release from jail as he was finally acquitted of a murder that he did not commit after serving a number of years in jail for a crime he DIDN’T COMMIT!

He confessed to me that he just really liked to ride his bike beside the river, it brought him a lot of relief… Fred story was a bit heavy for me because as I am a very fortunate middle class white kid whose biggest emotional turmoils are “bad” breakups I had trouble relating. And I felt any of my woes were completely insignificant in contrast.

But back to more positive stuff! I spent almost every night getting 2 $1.50 vegetarian samosas and dancing at the free stage, in the Exchange district of Winnipeg. 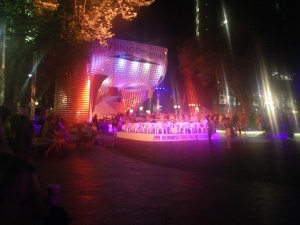 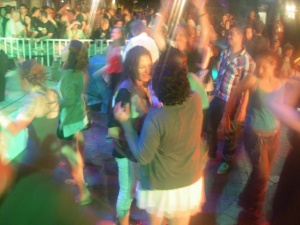 (the stage and dance floor)

While in Winnipeg I even got a surprise visit from my cool BC friends John, Jodie and Will. John and Jodie are expecting a little gaffer and I quickly was like “have you heard of Bowser, great place to raise a family!”. My recruiting of young folks never stops.

The other fellow Will is one of those people who you quickly realize is as easy to hang out with, as it is to eat delicious room temperature pizza. He was even so kind he hooked me up with some excellent donations to Dion’s cross country bike trip and connected me to an amazing vegan burger restaurant called Boon Burger. (Eat here if you are ever in Winnipeg). 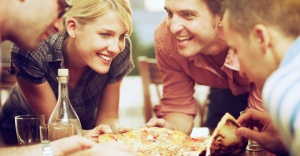 (“Hey everybody doesn’t this feel just like hanging out with Will?!”)

It was so good I took a girl I met at the free stage named Heather to join me for a burger and a show. Our Boon Burger was delicious and we caught a great one women show called Pride and Promiscuity, and even was donated a free ticket as it was otherwise going to go to waste. My adventures with Heather would cap off my my last evening in Winnipeg as the next morning at 8:30 I took a ride share to Thunder Bay.

When I arrived in Thunder Bay several warm showers hosts volunteered to take me in but one in particular Megan, had an offer I couldn’t pass up. Here was her text “I’m heading to Kanga’s sauna tonight with some friends. You’re welcome to join. It holds 20 people and involves a shower room and a hot tub and alcoholic beverages.” How could I pass this up!?

So I respectfully informed Dan and Frank I had another host and went off adventuring. And to my delight it was as advertised. A super cool spa where I got to hang with her friend group and like an idiot I didn’t bring my camera. But look a stock photo with an appropriately funny caption.

(“Ummm who the fuck invited the really hairy guy, who won’t stop making mediocre jokes and talking about bikes!? Did he just take a picture of us!??”

But I  and had a great time in this relaxing and fun environment. And “old Dion” was a great hit with the locals whom were happy to hear about my adventures and laughed at many of my jokes, I received a number of accolades that are always flattering to hear. But I try to “not let success go to my head, nor failure go to my heart” so despite the wealth of positivity I always remind myself that I am am still a Neanderthal in clothing. 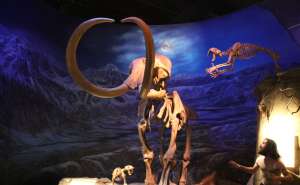 (I mean look at me, I literally look like I am right out of the Palaeolithic!)

Anyway that sums up where I am at. Thanks so much for reading. Have a great week.